Stage 3 Zubiri to Pamplona – Once again I started off early in the hopes of missing the forecasted rain, this time at 6:00 in the dark and walk through the very dark woods with my headlamp for the first time and later to the setting moon and then a beautiful dawn. The walk was lovely being sunny most of the time and very quite. I had the chance to walk along the Argo River almost the entire way to Pamplona. At times I walked with a person or two and for a long time by myself. For those of you reading this who don’t know me well let me tell you “alone time” is not my go to but it was AWSOME – a chance to think and a chance not to think about anything (you could call that prayer time if you were so inclined). 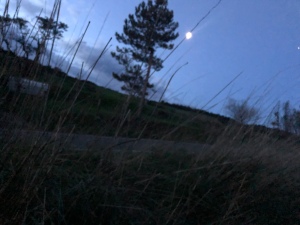 As of the writing of this post (6:45pm local time) the rain has not made an appearance. I am still glad I got such an early start to the days walk because I arrived in Pamplona by 11:30am giving me ample time to explore this rather interesting city. Had a lovely lunch of a dish of octopus and one of eggplant, ham and cheese which is as close to a vegetable I could find besides olives (which while green are a fruit I believe) and hot peppers, both of which I have had more then my fare share of and plan to eat more. Continuing on the vegetable stand- there is a lot of white asparagus in Spain, it is everywhere. Asparagus is about the only vegetable I really don’t like (no need to comment unless you agree, that’s how this works.)

Ok, where was I before I went off chasing that vegetable squirrel? Oh yeah, my day in Pamplona. I walked the city because walking more seemed to make sense at the time. On my stroll I came upon the Plaza de Toro – as one does. The Plaza de Toro is the 2nd largest bull fighting ring in Spain and the 4th largest in the World – look it up and report back. Interestingly it is the oldest engineered cement structure in Spain being built in 1922 and the end point of the Running of the Bulls. I took a self guided audio tour and it was quite good. It focused on the structure, the fights and the lives of the men and bulls involved (and yes “men” because only a man would be silly enough to fight a bull) and the running of the bulls during the Festival of Saint Fermin. St. Fermin was a martyr put to death either during the Decian or Diocletianic persecutions – If you are really bored, look it up and then re-examine how you spend your time.

Ever since I was a child and first heard of the running of the bulls and later read Hemingways The Sun Also Rises I have wanted to run with bulls in Pamplona – yes I was that kid. Now that I have seen a very unglamorized and not at all romantic short film on the subject and have stood on the sand of the ring that has been saturated with the blood of so many bulls and not to few men over the century I am not so interested. “Look mom I am maturing” and I’ll call that progress. 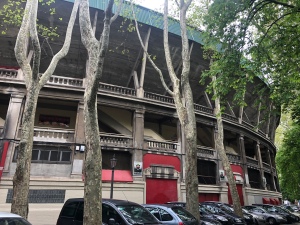 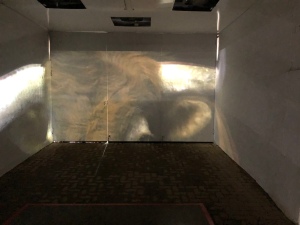 One thought on “Hemingway knew what he was talking about, sort of.”