This was supposed to post a couple of days ago but I was having WiFi issues – still cant get it to download picture, hopefully soon.

This is my first post in a number of years (that number being 4). The reason for this resurrected blog (its an Easter thing – get it?) is that I am once again walking the Camino De Santiago, some 600+ miles from St-Jean-Pied-de- Port in France, over the Pyrenees (ugh) across Spain to Santiago de Compostela. The reason for this walk has not yet been completely revealed to me, but ever since I did this pilgrimage in 2014 I have wanted to return. Due to the graciousness and patience of Priscilla, my wife, and the generosity of the good people of St. James’s Episcopal Church in West Hartford, were I am rector, I am on sabbatical and find myself on this historic and grueling pilgrimage/walk again.

If you want to continue to fallow me as I cross Spain there are a few ground rules we have to set.

1: I am a terrible speller and even though I use spell check errors will happen.

2: My use of punctuation is often incorrect but works for me – so enjoy

3: I blame 1&2 on my dyslexia so to comment would be rude and really not to the point😁.

4: if these things bother you, I am sorry and suggest that you do not read on as they will be ever present without my resident proof readers.

5: I will only blog from time to time, with more frequencies at some points then others – sorry, I know that it is fascinating 😉.

6: Please enjoy what I do offer – this is understandably probably not very important to you – but it is to me.

7: My humor is an acquired taste so be generous – that should be a life rule for everyone.

8: Most importantly please keep me in your prayer as I walk and Priscilla in my absence (although I think secretly it is nice for her after 32 years of marriage to have a little quite.)and (what is that about absence, the heart and fondness)

Now that I am back home and have both reliable internet access and have had some time to reflect, I figured I would post a couple of blog entries over the next couple of days. This first post will be some facts (the who, what and where of it all) and a few images from my short time trekking in Peru. The next, will hopefully be a little more reflective, an opportunity for me to share a few thoughts on what this time away has meant to me.

When I first conceived of this idea of trekking/hiking to Machupicchu in the Peruvian Andes I had assumed that I would go by way of the “Classic Inca Trail.” After a little research I came to the conclusion that this route was far more crowded than I would enjoy. So, I did a little research and found that a few years ago a new trail was developed to take some of the pressure off of the Inca Trail. This sounded perfect, so I booked my guide and paid my money for what is called “The Salkantay Trail.” So called because of the fact that on the second day we hiked to the Salkantaypampa or Salkantay Glacier at the altitude of 15,200 feet (the highest point on the trek). Me being me, I had gotten so excited about this trip and the new route I had not thoroughly read the information on it. Yes, I had read all the “important” stuff like cost, date and what was included and not included, but I had not read the route description completely. As it turned out, the route I had chosen was much higher, steeper and longer (both in miles and days) than the Inca Trail. Once I discovered this, I have to say I was a little concerned. As a 51-year-old man who is not in bad shape but could use to lose a fare bit of weight, I thought this might not be the best of ideas – but that has never stopped me and hopefully never will. No guts no glory, no pain no gain – after all this was supposed to be an adventure, a personal, physical, spiritual and psychological challenge. AND IT WAS.

The Facts: 5 days & 4 nights, 78 km/50 miles (vs. 43km/27miles for the Inca Trail) and the most extended steep hiking I have ever done. At one point we climbed upwards for nearly 3 hours. Distance hiking has never been my problem – I did well over 1000km last summer in Spain on the Camino de Santiago. It is the steep grade of this hike that I found so grueling. And it was great. 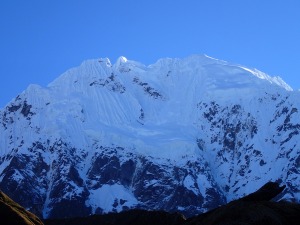 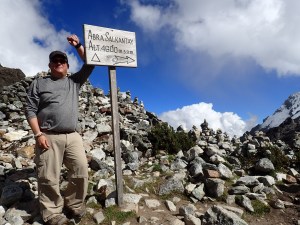 The guide service I used was SAS, a locally owned and operated company. Because I was on my own a group of 10 of us were put together along with a guide, asst. guide, cook (food was very good and prepared under very difficult circumstances) and small support staff of a couple of porters and 2 others. The group put together was one of the best parts of the trip. As I said, I am 51 years old and the next oldest person in our group of 10 was 28 years old. At first I thought this might prove to be difficult and I might feel like an outsider, but it was really fun and they all proved to be great to hang out with and really pushed me physically. I was also the only American in the group – but since they were mostly European, they all spoke beautiful English. I joked that the only people on the trip who had trouble with the English language were the Australians and the American. 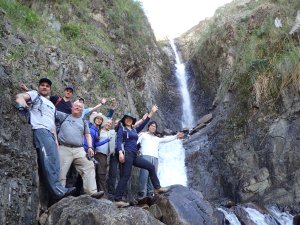 The Group: 2 Australian men, friends since high school, 1 a cardiac nurse (which I found morbidly reassuring) and the other a geologist with an offshore oil rig contractor. 2 women from Austria, long time friends and recent grad school grads, an Italian man who had attended grad school with the 2 Austrians, a German couple, she just having graduated from a masters program in psychology and having spent 4 months in Nicaragua working in a clinic and now traveling in South America with her boyfriend and 2 Koreans, a man and a woman, who had just graduated from Rice University in Houston. All were good athletes and many very strong climbers with years of experience traveling the world (Aussies) or climbing the Alps as weekend recreation. 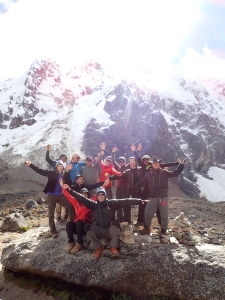 While Machupicchu was amazing to see and experience, it was the trek and the group that was by far the best part. I pushed myself physically and was supported by everyone, as we supported each other. You know me – it is these little communities that we create or find ourselves in that make life the joy and the adventure that it is. 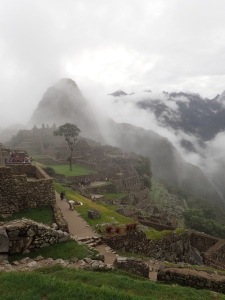 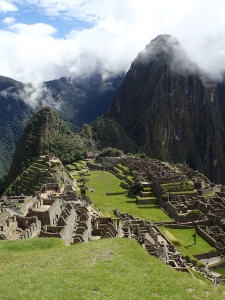