Now on that same day two of them were going to a village called Emmaus, about seven miles from Jerusalem, and talking with each other about all these things that had happened. While they were talking and discussing, Jesus himself came near and went with them, but their eyes were kept from recognizing him. And he said to them, “What are you discussing with each other while you walk along?” They stood still, looking sad. Then one of them, whose name was Cleona’s, answered him, “Are you the only stranger in Jerusalem who does not know the things that have taken place there in these days?” He asked them, “What things?” They replied, “The things about Jesus of Nazareth, who was a prophet mighty in deed and word before God and all the people, and how our chief priests and leaders handed him over to be condemned to death and crucified him. But we had hoped that he was the one to redeem Israel. Yes, and besides all this, it is now the third day since these things took place. Moreover, some women of our group astounded us. They were at the tomb early this morning, and when they did not find his body there, they came back and told us that they had indeed seen a vision of angels who said that he was alive. Some of those who were with us went to the tomb and found it just as the women had said; but they did not see him.” Then he said to them, “Oh, how foolish you are, and how slow of heart to believe all that the prophets have declared! Was it not necessary that the Messiah should suffer these things and then enter into his glory?” Then beginning with Moses and all the prophets, he interpreted to them the things about himself in all the scriptures.

As they came near the village to which they were going, he walked ahead as if he were going on. But they urged him strongly, saying, “Stay with us, because it is almost evening and the day is now nearly over.” So he went in to stay with them. When he was at the table with them, he took bread, blessed and broke it, and gave it to them. Then their eyes were opened, and they recognized him; and he vanished from their sight. They said to each other, “Were not our hearts burning within us while he was talking to us on the road, while he was opening the scriptures to us?”

Over the past year I have had the joy and privilege to go on two extraordinary walks. At this time last year I was in the middle of a 35 days walk of over 1000 km across the north of Spain, following the accent Camino de Santiago. As of this writing I have just returned from a much shorter (thank God) walk of 5 days, 79 km on the Salcantay Glacier Trek, up and down through the Andes in Peru to Machu Picchu. While both of these “walks” were in very different settings and very, very different terrains, they have many things in common. The key similarity being that they are both associated with a destination. The Camino ends at the Cathedral of Santiago or St. James in Santiago de Compostela, Spain. Santiago is the traditional burial site of the recovered bones of St. James the Apostle and has been a major pilgrimage site for over 1400 years. Machu Picchu is the famed “Lost City” of the Inca “discovered” by Yale archeologist and explorer Hiram Bingham in 1911 after being lost to the jungle during the Incan genocide perpetrated by the Spanish Conquistadors under the command of Francisco Pizarro in the 1530s.

While both these walks are to someplace, it is not the destinations but the journeys that I will never forget. Traveling on foot, sometimes with great difficulty, and breaking bread three times a day with once strangers, is possibly one of the fastest and most ordinary yet extraordinary ways to get to know others and yourself and to build community. Jesus understood and practiced this throughout his ministry. Whether it was on the road to Galilee or the road to Emmaus, Jesus spent time walking, talking and eating. These are three of the most human of activities, yet we tend to rush through them. We more often then not walk simply to get somewhere and eat in a hurry, frequently in silence, to get to our next task.

If I have learned anything in the past 51 years and in particular in walking and talking with strangers or my loved ones through life, it is that – it is not the destination that makes us who we are but the journey. 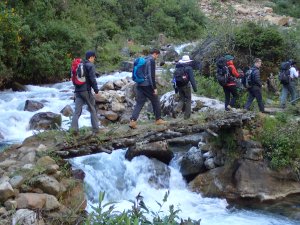 It has been some time now since I last posted to this blog. Reading back over my last post I see that I never let you know that I made it to Santiago. Well I did. I had a great last couple of days of walking and arrived in Santiago a few days earlier than expected, feeling great with the exception of a pretty bad cough. I spent a couple of days exploring the city and meeting up with friends I had made along “The Way.”

Before returning home I spent a couple of days in Madrid seeing the sights and yes walking for hours on end around that beautiful and busy city. It took awhile to get used to the noise and crowds of Madrid after so much calm on The Camino but I enjoyed myself throughly.

Now that I have been back from my walk for a number of months I have had many chances to reflect on the experience. I can easily say that it was certainly one of the most interesting/challenging/fun/rewarding things I have ever done. By the time I reached Santiago I, along with my walking companions, was quite clear that while we saw no need to do this exact walk again we all agreed we wanted to do something like it in the near future. The fact that I would never walk the Camino Franc again was pretty well set in my mind – that said I am already thinking about doing it again for my 60th birthday as this walk took place in the year I turned 50. Oh well, so much for making up my mind.

This May I will be trekking to Machu Picchu, the ancient Inca site in Peru, by way of the Salkantay Trail. This is a very different experience and opportunity. While the Camino was 500 miles in 30ish days this trek will only be 30ish miles in 5 days. That said this trip should prove to much more physically demanding as it takes place at times at attitudes of over 16,000 feet. My schedule is to fly out of JFK on May 4 arriving in Cuzco, Peru the following day. Spend 3 days in Cuzco (the ancient capital of the Inca empire) acclimatizing and visiting the many Inca ruins in the area. At that point I will hook up with my guide and begin the trek to Machu Picchu, God willing and my lungs and legs surviving I should get to Machu Picchu on the 11th and return home on the 13th.

I will hopefully post from Cuzco both on my arrival and departure.

I love to walk, explore places new to me and to meet folks from different places and walks of life; The Camino did this for me and I look forward to the same from this newest adventure – now it is time to get back into shape. 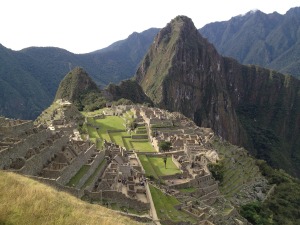